Norm and I have been hard at work prettifying the game as well as adding lots of new features. Here is a short list of changes:

The OUYA guys produce some really fun videos about various OUYA games in a segment called OUYA PRESENTS.  I was really excited to see that they did one for HardLander!  Check it out here: OUYA PRESENTS: HARD LANDER

Have more fun with your friends this weekend with improvements to ship physics and Sumo! Shove your friends into a laser wall and show them who’s boss. The ships are now easier to control for beginners and faster and more nimble for veterans. More fun for everybody!Level changes

This build removes slow mo from the SUMO level which allows some different stratagies such as shoving like this!

A little bit of explanation of how Slowmo works is needed. In most levels once a player wins by being the last person standing, there is a slow mo that lasts a couple seconds. This is fun because it adds a bit of punch to the victory, but also because if you die during this slow mo the round is a tie. This gives other players that would have lost something to root for and causes lots of cheering at the expense of the might be winner which makes the game more fun. However, in Sumo it’s fun to be able to push the player out of the ring. However, with Slowmo on this almost always resulted in a tie. This is possible because in Sumo ship to ship destruction is disabled so pushing is a valid option. I think this makes the level a lot more fun and interesting.Gameplay changes

Hard Lander has always been a bit top-heavy. This can be fun because it requires a high level of skill to balance without crashing. However durring playtesting I realized that this makes the learning curve a bit too high for new players. So I reduced the mass of the top of the ship by 30%.

This changes the ship behavior in two ways:

HardLander is going to Indiecade!

HardLander will be at Indiecade, showing with OUYA!  You should definately come check out the game.  But don’t forget to bring friends because Hard Lander is always better with friends.

Fresh from showing at PAX Prime, the new show build is now available! If you have an itch for super competitive local multiplayer games, you owe it to yourself to check it out! Version 0.84 continues on the competitive vision of hard lander by giving you more control over the environment as you master your piloting skills.

In the level Death Sphere, you can turn on up to 3 lasers and by touching the activation pads. You can then proceed to get the sphere spinning by hitting the protruding laser canon with the back of your ship just right, all but ensuring a full screen wipe of your upset but impressed opponents.

Continue on to laser lab where you can precisely control the direction of a mounted laser beam based on your position on the laser pad. If you’ve mastered the crab walk (which is shown in the first challange level) you will be able to slide across the pad, sweeping the entire bottom of the level. But watch out because an observant player may be up to your tricks and screen wrap on top of you before you ensure your victory. 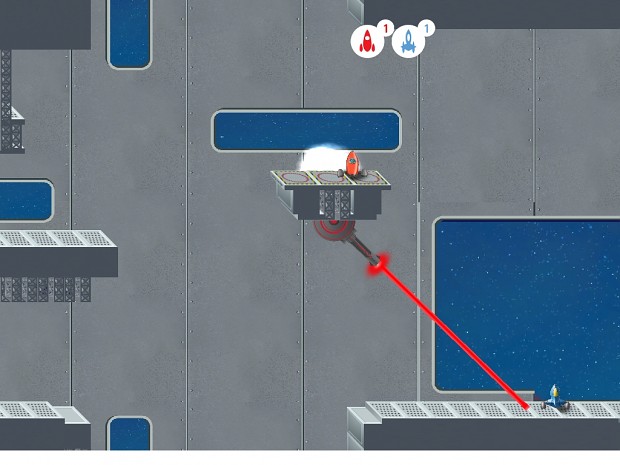 If this looks like something you want to play, pick it up on Desura or play it on your OUYA!

If you wanted to play hard lander with your friends and dont have an OUYA, your in luck! On July 30th HardLander Alpha will be released to desura for Windows. If you are a youtuber with over 100 subscribers leave a comment and I will send you an advanced copy.

At Outerspace Industries we train all of our test pilots with the best training possible. This video shows pilots how to react when testing with multiple pilots at a time. Safety first!

Do you have friends? Do you want to smash them with the butt end of a rocket ship? Then you should check out Hard Lander! The newest update has prettier graphics, and it’s more fun then ever. Here are a few of the multiplayer levels you will find in Hard Lander.

The Graveyard: A large level that lets you stretch your wings and outmaneuver your opponents. If you think this still isn’t enough room to pick up speed, fret not because the level wraps horizontally letting you zip across the wreckage below picking up speed until you find the right opportunity to descend down and clip your enemy.

Has gravity got you down? Then take to the stars and hunker down between some Asteroids. In this level there is no gravity, and asteroids start with random forces making each round a little bit different. This level features vertical AND horizontal wrapping giving you ample opportunity to outwit your witless opponents. If that isn’t tricky enough for you, try charging an asteroid and get it hurling towards your friends noggins.

If sitting on your friends is a little too personal give Laser Lab a try. Here you can control the battle field from afar. Once you have mastered a soft landing, Laser Lab will let you dominate by controlling a set of laser pads near the top of the room. Don’t let up your guard though, a resourceful opponent might just screen wrap on top of your head!

After over a year of working on Hard Lander off and on and quitting my job 6 months ago, I am pleased to announce that Hard lander has been released on the OUYA console! Give it a try, it’s like ballet with missiles!

I really wanted to create a fun, rewarding couch multiplayer game and the OUYA seemed to be the perfect fit for an unknown developer like myself. Playing hard lander is like a ballet, or like riding a unicycle. It isn’t pretty at first, but to those that put in the time, it becomes something beautiful… or at least freakish. Either way I want people who get good at the game to usher gasps of astonishment from their friends and foes alike.Laughs are cheap, man. I’m going for gasps.

Eventually I hope to be able to port the game to wherever people want to play it, but for now I am focusing on updating content and getting feedback on the game on the OUYA platform. I hope that a few of you brave souls will boot up your little boxes and give it a try.

Push Hard Lander to my OUYA!

Trophies have been added to Hard Lander! Let’s face it, this game is hard and you deserve to be rewarded for your efforts. Trophies are added for crashing 10 times, and completing the first level. The rest of the rewards are reserved for the skilled and tenacious alike! Give it a try and see if you have the patience and skill to make it to the top!

Trophies have been added to Hard Lander!
Let’s face it, this game is hard and you deserve to be rewarded for your efforts. Trophies are added for crashing 10 times, and completing the first level. The rest of the rewards are reserved for the skilled and tenacious alike! Give it a try and see if you have the patience and skill to make it to the top!